Goldie was a whirlwind to campaign in 1998.  She won the approval of breeders and judges very quickly. From the start of her campaign, it was apparent she was a winner.

Goldie finished her American Championship at 18 months in July 1998. Then traveled up to Canada to finish her Canadian Championship at the Canadian Specialty weekend winning Best of Breed from the classes over top ranked Canadian and American Specials Then on to a  Group  One Placement.  Goldie ranked number 8  in the Irish Setter breed in 1998 in Canada.

Goldie has been shown occasionally in Local shows and Specialties.  She is admired by many judges for her total and absolute soundness. She has won many Best of Breeds and Best of Opposites on these occasional appearances.

Offspring: Ohkom’s All that Glitters aka GLITTER 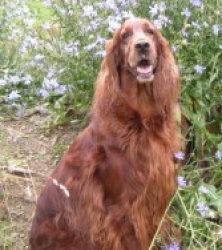 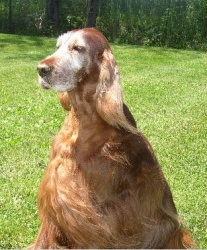 Starting to show her age here at 11 years still beautiful.